Please make sure your child has plenty of fast-acting carbohydrates available when trick-or-treating on Halloween. 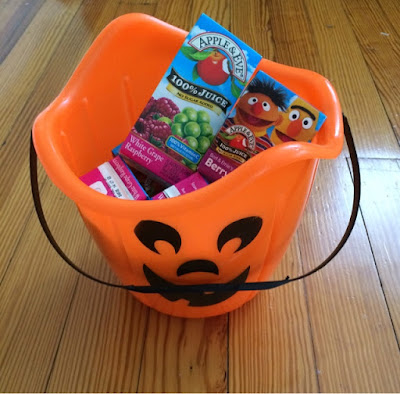 'Wait...what?' you may ask, 'but it's trick-or-treating! There are fast acting carbohydrates at every door!'

Trust me. There are not. We've been there not once but twice. Once we were unprepared and the second time just underprepared.

The year she was 6, my daughter's blood sugar was over 150 when she left the house, perfect for a little walking followed by a sample or two from houses of people we knew.  We went around the corner to meet the neighbors. There was a little running around in the yard until the youngest neighbor was ready to go.  By house #3 my kid was low.  In her bucket were fritos, a spider ring and a 3 carb dumdum pop.  Houses #4 and #5 offered Hershey's kisses and tattoos.  We had to drag our party back to our house for juice before proceeding.

A few years later we were trick-or-treating  in a friend's neighborhood.  We'd covered a couple of blocks when suddenly my kid was not just low but in the 40's.  I had one juice box with me, having assumed that would be enough, since we'd gain a stash of candy as we went.  Despite having visited a couple dozen houses, my little witch had received almost exclusively peanut-butter cups, snickers and chips, all members of the 'slow-acting don't eat this if you're low' carbohydrate category. It was dark and difficult to see into her friends' plastic pumpkins to ferret out all of the available smarties and nerds, which she downed in rapid succession as we continued on our route.

So take it from a mother who has seriously considered asking for orange juice in lieu of the spider ring, assume nothing; except that you're taking a long walk, at night, probably at an hour when exercise is unusual.  Bring the juice.