I mentioned a couple of weeks ago that we're on a muffin kick here.  They're the new go-to lunchbox addition.  Summer (and blueberry season) have sadly come to an end, but frozen blueberries work just as well as fresh in this recipe:

Whole Wheat Blueberry Muffins
Preheat oven to 400°
Combine the following in a large bowl (large because you will eventually have all the batter in it):
1 c. milk
1/4 c. vegetable oil
1/2 tsp. vanilla (or a little more)
1 large egg
Combine the following in a separate bowl:
1 c. white flour
1 c. whole wheat flour
1/3 c. sugar*
3 tsp. baking powder
1/2 tsp. salt
Add dry ingredients to wet and stir until just combined.
Fold in:
1 c. fresh or frozen blueberries**
Spoon batter into a greased or paper-lined muffin tin.
Lightly sprinkle with cinnamon sugar if desired***
Bake 20 -25 minutes for large muffins, 14-18 minutes for mini muffins, until an inserted toothpick comes out clean.
Yield: 12 large muffins, 30-36 mini muffins (I ended up with 32).
With 32 made, they mathed out to between 9 & 10 carbs each.
*Yes- real sugar. I have made these with Splenda and they come out fine that way too but a little denser, and they're dense to begin with.  Especially since it's such a small amount of sugar, I don't think it's worth the substitution.
** Especially for mini muffins, the smaller the berries the better.
*** We like a sprinkle of cinnamon sugar to give the muffin top a little texture. We usually have a container of cinnamon sugar mixed up in the pantry to sprinkle on toast or muffins. Our formula is not an exact science. The general recipe is: a couple of spoonfuls of white sugar combined with several generous shakes of cinnamon until it's approximately this color: 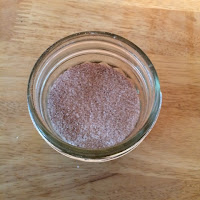 Blueberry muffins are great for a little taste of summer year-round.
But fall has arrived, so be on the lookout for something apple-centric in the next edition of The Muffin Chronicles!
﻿
By Pam Osborne On October 11, 2016