Back in October of 2014 I wrote a post entitled,  'Why We're Not in the Cloud.'  My reasoning centered around allowing my daughter to problem-solve her own diabetes issues as independently as possible.  I did not want to be hovering over her metaphorical shoulder, texting ' You're 68- did you go to the nurse?' Or 'Why are you still 250, didn't you correct that yet?'

Fast forward 2 years and we've just received and activated a Dexcom G4 Share receiver and downloaded the app on our phones. 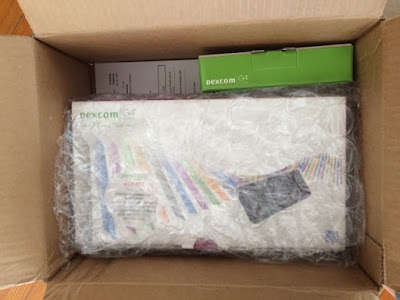 1.   My daughter wanted to be able to see her numbers on her phone.  She's a 14 year old high school freshman and that's the kind of stuff they're into. She thought it would be both 'cool' and convenient to be able to use her phone as her primary source of dexcom information.

2. Our family recognized that having a virtual diabetes care team was increasingly important. Gone are the days of a parent, nurse or other diabetes-aware individual being within shouting distance at all times. My daughter is doing more and more of her care and troubleshooting on her own, which is great.  But especially during the transition, it's comforting to know someone else has an eye on her numbers in case problems arise.

3. This one's all about me.  Being able to see her blood sugar on my phone will, I think, give me a little peace of mind when she's traveling on a school bus with the marching band, out late with friends, home alone, or when the school days are followed by long theater rehearsals.  I'm already not sure how I survived the first birthday parties and sleepovers without it.

4.  Because my daughter is busier, we'd rather spend the moments we have together talking about something more interesting than how her blood sugar went all day: was she low in gym, did she spike again after lunch, did the breakfast correction work okay? If there's an issue, then we can get straight to fixing it, otherwise we can talk about other, more interesting, news of the day.

For now the constant stream of information is addictive.  We're entertained, and occasionally alarmed. Only time will tell how this will end up working for us. I look forward to sharing the plusses and minuses in the weeks to come.