Their shares of JDRF's tweet were accompanied by phrases including:

OMG I may start crying

This might be the best news I've ever heard

I'm over the moon

The exclamation points and happy emojis were innumerable.

I did tweet this, sans even one exclamation point: 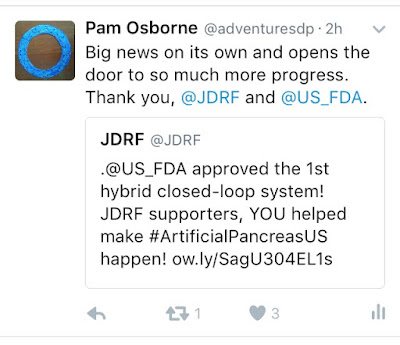 It is, indeed, big news.  Somehow it's not hitting me, though, as BIG NEWS!!!
I'm generally pretty even-keeled, so to be fair, my twitter feed will never feature countless exclamation points or party-themed emojis.  But I began to wonder what else was feeding my cautious optimism about this news.
Perhaps it hasn't sunk in properly yet. Perhaps it's because while approval came faster than some suspected it would, I knew it was on the way so was not completely surprised.  Perhaps it's because while it's a huge advancement, it's not the end goal as far as artificial pancreas products go.  Perhaps I'm considering the insurance environment we're currently in, making me worry that access is a potentially huge issue.  Perhaps I'm wondering how well it actually works.
Don't get me wrong, I'm happy this has happened.  I'm happy that it looks like my kid will be wearing some kind of artificial pancreas system to college.  That's been my hope since it began to seem like a faint possibility.
I'm happy that people will be acquiring these devices and living safer and healthier lives.
I'm particularly happy that this product's approval will pave the way for greater innovation so that eventually my kid will be wearing a system that's mindless and completely foolproof.
For right now, though, I'm just more 'excited' than I am 'EXCITED!!!'
By Pam Osborne On September 28, 2016