It was Saturday evening at 5:30. My daughter had, as is her custom, waited until the last minute to do a site change.  In less than half an hour she would be leaving to go out to dinner with friends: a gathering to commemorate the end of summer.  Just a quick site change and she would be off.

Supplies were gathered.  The cartridge was filled.  Wipes were applied.  The pump was picked up and buttons were pressed to 'rewind' the area that holds the insulin in order to accommodate the new, full, cartridge.  The motor started to buzz and then...

'BEEP boop BEEP boop.'  It sounded like a very tiny ambulance.  The message on the pump screen read: 'ALARM  CALL SERVICE  No delivery.' There was a code number.

It was then that our lives passed before our eyes.  Diabetes-wise anyway.

Without that information we would be challenged to figure out how much lantus to give her if the pump was actually dead.  Then, how would we figure out how much novalog to give for dinner and for meals and corrections to come?  I'd have to call our diabetes clinic and get help.  On Saturday night of a holiday weekend.  And what if a replacement pump couldn't come until Tuesday- after Labor Day?  What if she had to go through her first day of high school on Lantus and Novalog shots?

The representative I spoke with did not seem panicked or pessimistic.  This was encouraging.  "Have you tried rebooting the pump by removing the battery?"  I had not.  "Let's try that."  My daughter fetched a quarter.  It took longer than usual, with my shaky hands, to use the quarter to unscrew the battery cap, but I did it.  We removed the battery, waited a few seconds, put it back in.  The alarm screen was gone.  I was told to attempt to rewind again, and if that was successful to continue with the whole insulin replacement process while still on the phone with the representative.

As it began to become clear that things weren't as bad as I had imagined they might be, I said to the representative, "It sounds like this isn't as big a deal as I thought it might be...is this a common call you get?"  She explained that when the pump rewinds it does a series of self-checks and that if it detects a possible abnormality this alarm screen comes up.  Rebooting the pump and rewinding it again causes it to recheck itself and most of the time it does not alarm a second time, meaning (apparently) that the first one was a false alarm.  She did say to call if it happens again, so that they can document it, and that if becomes a regular occurrence they would need to replace the pump.

In the end, we loaded up the new cartridge and primed the pump with no further problem.  While my daughter finished getting herself ready to go out, I jotted down total daily doses from the pump's history, her basal rates and ratios, and every other number I could think of.  And I set a reminder in my phone to do it again after the next endocrinologist appointment. 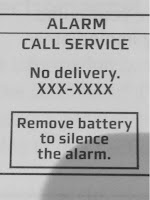 So please, pump users, take this as a cautionary tale.  Please (today) make sure you have all your info jotted down or electronically stored somewhere other than your pump, and that you have the equipment and knowledge you need to activate your back-up plan.  Hopefully, like us, you won't need it.  With any luck you won't even be late for dinner.