The Insulin is Insulin Conversations


At last month's endo appointment we needed just one prescription: Lantus to have on hand in case of pump failure.  Our doctor sent the Lantus prescription directly to our local CVS through the diabetes center's online ordering system, just as he's done every time our emergency vial has expired.

By the time we got home there was a voice mail from a pharmacist. The Lantus was no longer covered by our insurance. I needed to return the call to talk about next steps.

When I called back, a pharmacist walked me through possible substitutions. I explained that I wasn't terribly picky as long as there was something in the fridge which would keep my kid alive for a day or two until a new pump arrived. We decided that whatever the doctor ordered to substitute would be fine with me and that if there were choices I'd take the one with the lowest copay.

We left for spring break the next day expecting a voice mail upon our return telling us that the prescription was ready for pickup. There wasn't one, so I called.

"Yes- I see that the Lantus wasn't covered but that the Novalog was picked up as a substitution."

"Um...no. The Novalog was a different prescription which we refilled around the same time. Novalog isn't a substitution for Lantus- they're different kinds of insulin. The pharmacist I spoke to was going to call the doctor to request an appropriate substitute."

"Oh- I'll give the message to the pharmacist so that he can call later today."

Two days later, still having received no notification that the prescription was ready, I called to follow up.

"Yes I see that the Lantus wasn't covered, but the Novalog was the substitute for the Lantus, right?"

"No. It wasn't. And also, that's not possible. They do different things."

Again, "I'll have the pharmacist call the doctor's office."

I responded with something only slightly nicer than, "Don't make me have to call you again."

Two days later I called again and was transferred to the actual pharmacist.

"We've been calling the doctor since yesterday afternoon and haven't been able to reach anyone."

"It's a huge clinic, not a private practice. That seems highly unusual."

"Yes, but it just rings and rings."

We verified that they had the correct number, which they did, and then the pharmacist asked if I would call instead.

So I did. I called the office, where I was quickly connected to someone who answers the 'prescription line.'

I recited my tale of woe and provided the necessary details about the pharmacy.

An hour or so later I received a call back from the diabetes center.

"Hi- I'm calling you back about the Lantus. You have the Novalog, right?"

"Yes- that's not the problem."

"So then what is it that you need?"

"An alternative for the Lantus."

"But you have the Novalog."

"We have the Novalog which is in my daughter's pump- the fast acting insulin she uses 24/7. Then we keep Lantus, the 24 hour insulin, on hand in case the pump fails."

"Well...yes. I don't know what the pharmacist was saying then. Let me call him back."

An hour or so later the woman from our doctor's office called back and said that doctor's orders for Basaglar insulin had been sent over to our CVS. I received confirmation of this new order through the office's online patient portal.

Another weekend passed with no news from CVS, so on Monday I called and inquired about the status of my daughter's Basaglar insulin order.

"Yes. We are working on that."

"Yes. Well. Let me see if we have that in stock." There was a brief interlude of top volume static-y piano music and then, "Yes. I have it here. We will have it for you this afternoon."

And, believe it or not, they did. Except it was in the form of pens, which we've never used. 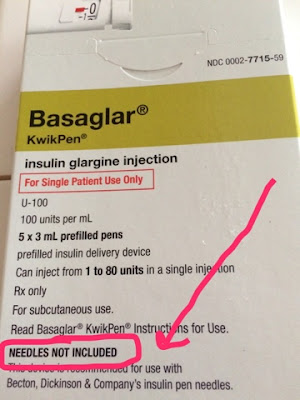 So now I have to call to get insulin pen needles.
Meanwhile, a quick google search tells me that if push comes to shove I can draw the insulin out of the pen with a regular syringe. Which is reassuring, since who knows how long the next step will take.
﻿
By Pam Osborne On May 02, 2017