An Hour's Worth of Emotions

Today let’s revisit a prompt from 2014 - May is Mental Health Month so now seems like a great time to explore the emotional side of living with, or caring for someone with, diabetes. What things can make dealing with diabetes an emotional issue for you and / or your loved one, and how do you cope?

I present to you the story of the events of Monday morning, with words describing our wide-ranging emotions about said events highlighted in bold print:

On Monday, my kid arrived at school anxious- not about the first day of standardized testing, but about which teacher had been chosen to proctor her private testing room. Her 504 plan has accommodations allowing her to stop and restart testing to deal with any diabetes issues, so she is separated from other kids since her test might be timed differently than that of others. "It's so awkward, mom, I hope it's a teacher I know at least." She checked the list posted in the school lobby and was confused. She had, inexplicably, been assigned to a room with a large group of special education kids. The texts to me began...

"Go to guidance and explain that you've been told you were testing alone."

We texted back and forth for 25 minutes or so while she sat in the guidance office. People came in and out asking her questions and then disappearing for stretches of time. All of the teachers not assigned to a testing room were summoned to the principal's office via the PA system. She eventually stopped answering my texts at which point I assumed the situation had been resolved and that she had started taking the test somewhere- with someone.

Scrolling back through those texts, the words and emojis described the following emotions: 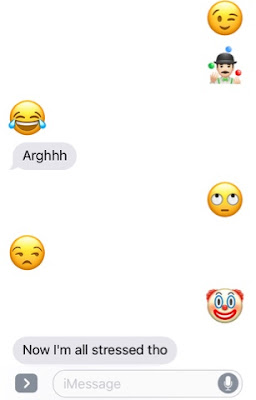 Those were interspersed, because how else were we going to cope, with

In the end she was relieved that it got resolved, and amazed that the stress hadn't spiked her blood sugar. We were surprised that the rules required 2 teachers to be in the room with her and thankful that they were two teachers she knew and liked. They helped her settle in well and she feels confident about how she did on the day's tests.

In the end, I was proud of her for handling the situation herself and happy that technology allowed me to support her via text.

I would be embarrassed, however, if school officials discovered the number of circus-themed emojis I sent over the course of the morning.

While this story highlights in a somewhat lighthearted way how diabetes can lead to a wide range of emotions in just an hour of every day life, the possibility of long-term serious mental health issues is real. Depression, burnout, anxiety and other mental health issues impact most people with diabetes and their caregivers at one time or another. To read other perspectives on this topic, click here.