Yesterday was endo day. We had a 4:30 appointment in the city.


Yesterday also happened to be an extra long weekend day off from the music program my daughter attends in the summer. She's usually there from 8-3.

So what could have been a rare lunch and afternoon at the pool with friends looked instead like it would be a boring morning of errands and chores, a boring peanut butter sandwich and maybe some screen time before a long car ride, a doctor's appointment and  another long ride home through rush hour traffic.

Not so fast.  Maybe we could make some lemonade out of those lemons.  A little creative thinking, mapquesting and internet searching led us to a truly fun day at the zoo. There was some challenging driving involved, and a little anxiety about the timing of the whole operation, but we went for it. 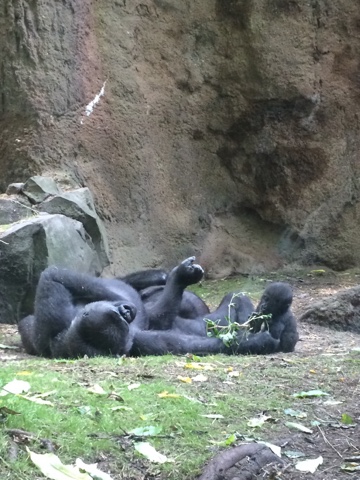 We got ourselves up and to the zoo when it opened and spent about five hours wandering around watching penguins, monkeys, bears, and especially this baby gorilla.  Who was adorable.

We had an awesome time.  We arrived at our appointment plenty early.  The appointment went well too. But dinner conversation revolved around the zoo, with any diabetes-related news taking a definite back seat.

Living with diabetes comes with a long, annoying list of responsibilities. There are days when diabetes usurps possibilities which would be more fun.  Sometimes sitting out an activity with a low blood sugar, or missing an after school activity because of a doctor's appointment is just the way it is.  But sometimes, with some extra effort, it can be an excuse to do something great.  I highly recommend taking advantage of those opportunities.  Especially if there's a baby gorilla at your diabetes clinic's closest zoo.