We were headed out for a Father's Day fishing expedition.  My husband, daughter and nephews set out first along the short path to the pond. The rest of us straggled behind, finishing coffee and gathering the extra bug spray.  My husband reappeared shortly, with a long gash in his palm.  It was not from a fish hook. 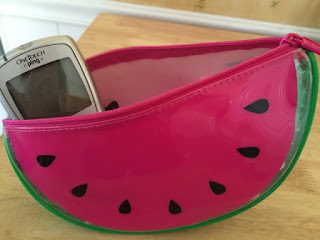 Retracing the chain of events, here's what happened:

When I passed the meter bag down to my daughter from the loft of the cabin, she dropped it.  She quickly picked it up, put it in a ziploc bag with the dexcom and a juice box. With everything waterproofed for drizzle and proximity to the pond, they headed out the door.

On the way to the water, my daughter took her fishing rod from my husband in trade for the diabetes supply bag.  While he was shoving the bag into the large pocket of his windbreaker, he was cut. 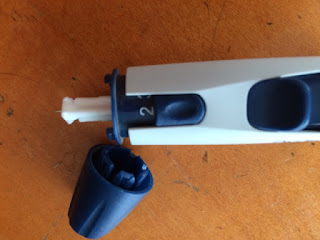 As best as we can figure, the lancet cap popped off when the meter case hit the floor.  An increasingly unlikely series of events followed. The tiny sharp tip of the uncapped lancet poked through the thick plastic case the meter is carried in. It then made it through the ziploc bag.  My husband grabbed the bag in the exact spot where the sharp was coming through and sustained his injury.

After some quick first aid, the fishing trip went on. Hooks were baited and fish were caught and released. A good time was had by all.

But consider this a cautionary tale.  Always check through the meter case after it's been dropped.