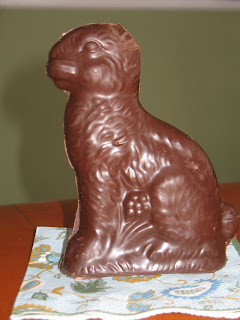 Now slightly shorter (and harder of hearing), his ears were solid, but most of the rest of him is hollow.  Made of dark chocolate, he weighed 4 ounces yesterday afternoon.


Calorie King tells me dark chocolate has 13.5 grams of carbohydrate per ounce.  Information is power, of course, but I can’t conceive of how I’d carve this guy up into 4 completely equal pieces.  I’d need some sort of engineering degree.  And if I cut him up, she’d miss out on the fun of biting the ears off, an opportunity every chocolate bunny eater should have.


So I guessed that those ears, since they were solid and fairly big, constituted approximately a quarter of the total bunny weight.  Thirteen carbs were bolused for.  It turned out to be a pretty good guess.


Much more importantly, my daughter enjoyed every nibble of bunny ears.  And tonight she has plans to eat the head.  Which might only be 8 or 10 carbs.  Unless the solid chocolate extends further down than I think it does. Who knows? In the long run an educated guess is better than a wild one, and both may be better than denying someone the joy of chocolate rabbit ears.
By Pam Osborne On April 26, 2011