I have no official connection to Gatorade, and this is not medical advice, but marching band practice is well underway here, and I have stocked up... 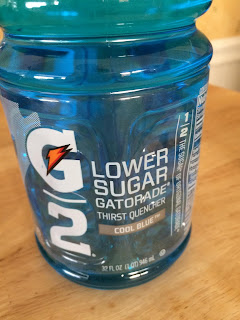 We first tried G2 for middle school volleyball which was a slow-paced, instructional, noncompetitive evening rec. league activity. We tried it mostly as a compromise because middle school is the era of 'all my friends are...,' and all her friends brought Gatorade to volleyball. As it turned out, it also helped her end up with better blood sugars than on the nights she didn't take it to practice.

There are eight grams of carbohydrate in twelve ounces of G2.  About that amount, poured over an abundance of ice and sometimes diluted with water to fill a large container, sipped slowly over the course of a 3 hour marching band practice, is just about right. Infusing just a few carbs per hour to burn off immediately seems, for her, to keep the lows at bay.

We've tried, as an alternative to this plan (generally when I've neglected to stock up at the grocery store), bolusing less insulin for pre-practice dinner, which just leads to an immediate spike. We've set temp basals, which lead to overnight highs. The Gatorade is what works for her.

Two years in, there have been 2 occasions when she's had to sit on the sidelines for a few minutes for a significant low to come up. That's with hundreds of hours of practice and performance.

It's obviously not just the Gatorade. A solid, healthy meal before practice, assessing the Dexcom or glucometer at breaks and reacting accordingly, and having a well-stocked bag of diabetes tricks including healthy snacks and fast-acting carbs are among countless factors crucial to staying in range enough to participate and enjoy the activity.  But on occasions when I've neglected to replenish the Gatorade supply things have not worked out as well.