It Shouldn't Be This Hard


I'm a good 4 weeks into my effort to secure my daughter's Dexcom sensors, test strips and lancets through our new insurance provider. I'm only a little closer than when I began.

I called the insurance company. Who said I had to use their home care case management company, Carecentrix. I talked with Carecentrix a few times more than should have been necessary. I did the job they assigned me: to ask my daughter's doctor's office send them prescriptions with very specific specifications. I was told that Carecentrix would then send my daughter's order to a company through which the supplies would be covered by my insurance. That assigned company would call me to make arrangements.

I received a call the next day from a supply company. The conversation ended with the very nice representative saying this:

"Well, ma'am, I understand you'd rather not switch to a new brand of meter. If you want to continue using the one touch strips...and it sounds like you do...I'm going to suggest you call Carecentrix back and ask for them to assign you a new supply company. I'm sorry I couldn't be of more help to you today."

A couple more phone conversations with Carecentrix, and I was told our supplies would be coming from Edgepark. "They'll call you in the next couple of days." Which they didn't.

When I called Edgepark they had my daughter's name in the system and the list of items requested which was more than I had hoped for. They did not have the correct insurance company, and they had my 16 year old daughter as the primary policy holder. Once that was settled, my phone call was transferred to someone else to 'confirm that the order was underway.'

"Next," I was told, "we have to verify your benefits, and then we will reach out to your provider for the prescriptions." Apparently neither the referral from Carecentrix nor the prescriptions that came along with it were good enough. "We have to fax your doctor paperwork and they have to fax it back with very specific information. It all has to be done on Edgepark letterhead, ma'am."

I asked, in as many ways as I could think of, if there was anything else they needed from me. No, I was told. New orders take up to 10 days to ship, and ours should be on the way within that timeframe.

A recorded telephone call the next day told me that Edgepark needed additional information to process my order. They needed me to call them as soon as possible. After 20 minutes on hold I was told they needed a 'valid method of payment,' which I provided. I was told, once again, that there was nothing else they needed from me.

The next afternoon there was a box on my doorstep! 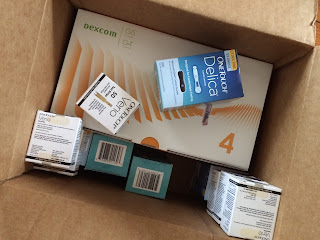 On the plus side, the Dexcom sensors are exactly what we needed. And, if there's a silver lining, the item we needed most urgently. The test strips and lancets, on the other hand, are being returned. Edgepark, I was told when I called to complain, doesn't carry the variety of lancets my daughter uses. The correct test strips are, allegedly, in the mail.