For a couple of years now my daughter's had a little inventory she's run through before leaving the house for almost anywhere, except, for some reason, school:

"Phone. Meter. Dexi." If one of them isn't on her person or in her bag, she'll go get it. If she's got it all, she heads out the door.

On day seven of school I received a text: I forgot Dexi. The Dexcom receiver was, indeed, still sitting in the kitchen. 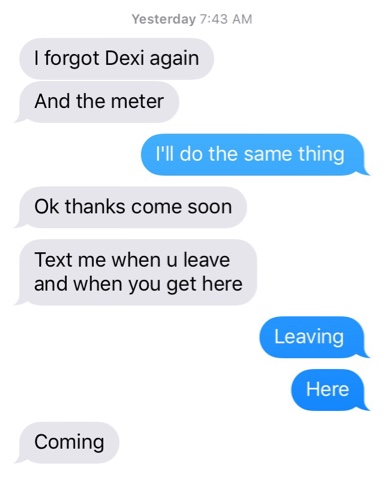 The school is only a couple of blocks away- a two minute drive at the most. Unless it's 15 minutes before school starts. Then it's an excruciating crawl with both vehicular and foot traffic clogging every route and intersection. Which is why, no matter the weather, and even though it's essentially a straight uphill climb, my daughter walks to school.

Accessing the school after classes begin is, as I learned last year when dropping off the Dexcom receiver, it's own kind of challenge. I was buzzed through two sets of locked doors and talked with a couple of school personnel, after which my daughter had to run through the nurse's office between classes to pick up the missing item.

So I drove to school, both times, pulling into the drop-off line with my flashers on while she ran out of the building to take things from me through the open car window before the first bell. She was efficient both times, but I imagine the people behind me still looked on with a combination of confusion and irritation.

While the texts may look terse in the photo, my daughter was, in person, both upset she'd forgotten her supplies, and incredibly grateful that I could drop them off. There's a spare meter at school, which she could have grabbed from the nurse's office if she had needed to. But the absence of the Dexcom info she's used to relying on made her uncomfortable, especially in the first week or two of school when the routine is still new and is therefore messing with her blood sugars.

The inventory is now part of our morning farewell routine. If she doesn't say it, I do. One of the perks of our current house is that I, theoretically, should never have to withstand the ordeal of the morning drop-off line. Nobody should have to do so without a child in the car.