Airport security experiences are like snowflakes- they're different every time. Fortunately this week's travel was different in a good way.

Our journey began at a huge, busy international airport.

My daughter's boarding pass was marked pre-check. The procedure was shoes on, metal detector only. She approached metal detector and said to the TSA agent, "I'm wearing an insulin pump which could set this off."

"Try it," the agent replied.

My kid walked through metal detector, and did not set it off. She looked at the agent who gave a friendly wave. "Have a good trip!" 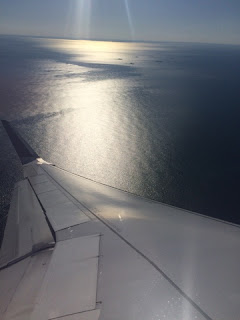 On the way home, at a smaller airport, the procedure was different:

Our boarding passes were, once again,  marked pre-check. Upon arrival at the first security checkpoint we were informed that because the boarding passes were printed at the hotel and not on site at the airport, the authorization was not valid and would not scan in their system. We were ushered to the full security, shoes-off, body scanner line.


The agent walked away with the pump (a little unsettling) and my daughter went through the scanner. The pump was handed back on the other side, as promised, and we continued on our way.

A couple of notes on our experience:

-On past trips I've been the person to speak to the TSA people, but I asked my daughter before we left if she'd be willing to be her own spokesperson through security. Eventually an opportunity may come for her to fly without me and I want her to be comfortable with the process. We talked quite a bit ahead of time about what could happen and how she would respond. She handled both experiences well.

-We're often tempted not to mention the insulin pump and just go through the metal detector hoping for the best. We certainly do that at museums and other more minor security checkpoints. But for some reason the pump occasionally does set off the metal detector. Also, because my daughter is on the smaller side, the pump is always visible in her pocket or on her waist band so it's immediately obvious that she hasn't followed the instructions to empty her pockets. For those reasons, when we're at TSA security or touring a highly secure location like a government building, we've always mentioned the pump first with the goal of heading off suspicion before it can begin.

-People make a variety of choices about going through the full body scanners and about putting their pumps through the luggage scanners. Some leave the pump on and opt for a pat-down, after telling the TSA agent that they want to avoid the body scanner altogether. Some send the pump through the luggage scanner and hope for the best despite many pump manufacturers' recommendations to the contrary. Some wear pumps through the body scanner, which is also not recommended for my daughter's brand of pump. To us the option of asking for it to be visually inspected seemed like the safest, easiest, least intrusive, and most efficient solution.

We don't fly often, but thus far we've had no two TSA experiences which were alike diabetes-wise. Sometimes the carry-on's contents have been called into question. Sometimes she's patted down despite the insulin pump being the obvious reason for the metal detector alarm. This week's TSA experiences were our smoothest ever. Maybe we've finally hit the sweet spot on the security learning curve. Maybe the voices, including my own, of people who've been reaching out to the TSA requesting common-sense security measures for people with diabetes are finally being heard. Or maybe the TSA is finally realizing there are more important things to worry about than a 15 year old girl with an insulin pump.